Scala, by being both Functional and Object-Oriented is easy to get started with, especially for java developers. However, to get the most of the language, you have to embrace its functional nature.

In this session, I'll show you how to start using scala's functional nature by presenting patterns originated in the functional world: 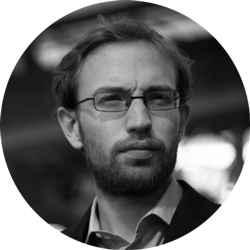 Clément Delafargue is an independent consultant. A graduate from École Centrale de Nantes, he has been developing web projects since 2002. He can work both on frontend and backend, with various technologies (Javascript (on both frontend and backend), Ruby, Java, Scala). He is particularly interestedin Functional Programming.

Very passionate about tech and development, he has co-founded Eklaweb, a sur-mesure dev company in 2009. He has gathered a team of engineers and taught them functional programming. He’s now an indepedendent consultant and works with several startups, such as Clever Cloud, and Sounderbox. Besides his work, he teaches computer programming at École Centrale de Nantes and IMIE (C, java, scala, haskell, PHP, HTML/CSS, PL/SQL). He also teaches continuous integration and functional programming to Centrale Nantes students. He has created Nantes Functional Programming Group and gives talks about functional programming.