UI programming hasn't changed since its inception. A tree structure of views, events on views, events bubble up the tree. This is the poster child of object oriented programming, each element in the UI is an object, the object points to its children, and so on.

React (by Facebook) changes everything, by making UI programming functional. At the same time, nothing has changed. Our UI will still be modelled as a tree structure of views with events that bubble up the tree. Types are propositions. Really? In what sense?

In this talk you will learn what React is and why you should use it. We'll look at the history of UI programming, the common ground for almost every UI toolkit in existence, and see how React does its thing in a functional way. We'll also take a look at React Native, to showcase that the React way of building UIs isn't limited to the web. 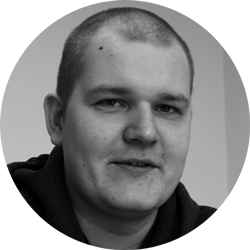 August is a full stack programmer at Kodemaker. He's spent the last couple of years building systems for NSB (Norwegian State Railways), before that a mix of UI programming for the web, iOS and Android, and various Ruby on Rails apps in many different shapes and sizes. When picking his technology battles, he will try to introduce Facebook React, Datomic and Clojure, in that order.